‘A natural and right step’

MHP leader Bahçeli commented on the AKP’'s HDP visit with these words.

MHP leader Devlet Bahçeli, in perhaps the most awaited group meeting speech in a long time, described the visit of the AKP delegation to HDP on the constitutional amendment as ‘a natural and right step.’ In the relevant part of his speech,what Bahçeli said is as follows:

‘Why did they meet with the HDP? What will we say, and how will we react to this? These are the hypothetical questions whose answers have been sought for days. I don't even need to repeat how we look at the HDP. It is a devastating and mischievous attitude for those who don't make a sound about the AKP delegation's contact with the CHP to talk about the HDP on our backs. In our eyes, the CHP is the same as the HDP. We do not look at what was discussed, we look at how a reasonable and democratic solution will be found.’

The AKP, which needs 360 votes to take the constitutional amendment to the referendum and 400 votes to adopt it without a referendum, has visited all parties with a group in the Turkish Grand National Assembly. On 2 November, Minister of Justice Bekir Bozdağ, AKP Deputy Chairman Ali İhsan Yavuz, and AKP Group Deputy Chairman Mustafa Elitaş visited the HDP delegation for the constitutional amendment proposal prepared by the AKP on domestic relations and religious freedom.

After the visit, AKP Şanlıurfa MP Mehmet Ali Cevheri said, ‘It is absurd not to go. It is a legal party, established according to the law. It operates under the roof of the Grand National Assembly of Turkey and has a group. We also need their support.’

Former AKP MP Mehmet Metiner said, ‘If entering into dialogue-cooperation with the HDP is a requirement of the vision of the Turkish Century, then would it be right to criticise the HDP by equating it with the PKK, and would it be right to blame others who are in dialogue-cooperation with the HDP? Is it only right when we do something?’. Metiner argued that ‘every word that will be said about the HDP from now on will run on empty.’

AKP executive Şamil Tayyar said, ‘The AK Party should conduct its relations with the HDP on the same level as it sees it. If it is a political extension of the PKK and a party that needs to be shut down, why are we discussing the Constitution with them? If the PKK is separate from the HDP, why did we need to use such a language and tone that put them in the same equation?’

İYİP Spokesperson Kürşad Zorlu said, ‘Indeed, parties should not use their standards of judgment to win elections. An understanding that anything is legitimate to win elections will lead to a problem of legitimacy in which the society and politics are at the center. It is an unacceptable approach.’

CHP Spokesperson Faik Öztrak said, ‘If you are doing politics of values and principles, you will bear the consequences. What you said before this, what you are doing now, I leave this to the consideration of our nation.’

Former HDP Co-Chair Selahattin Demirtaş said, ‘Instead of taking a share from this meeting and starting a fast meeting traffic with the HDP, the representative of legitimate politics, the opposition preferred to turn it into a storm to wear down the AKP and implicitly criminalise the HDP. It is inconceivable.’ He reacted to the opposition with these sentences. Demirtaş said that ‘no one can ignore the HDP’ and called on the opposition to ‘come together to form a realistic program to end poverty, hunger, war, and despair.’

Why was there an expected reaction from the MHP?

AKP Group Deputy Chairman Mahir Ünal, who had harshly criticised the language revolution in recent weeks, resigned from his post after Bahçeli's heavy criticism. It was interpreted that this development could be an indicator of a disagreement within the People's Alliance (Millet İttifakı).

The People's Alliance had long accused the HDP of being the political representative of the terrorist organisation PKK. The opposition parties' contact with the HDP was condemned. The CHP was associated with the PKK due to the meetings between the CHP and the HDP, and the thesis that the HDP was the ‘sleeping partner’ of the six-party alliances despite forming a separate alliance with the socialist parties was being processed. Even the CHP's alliance partner İYİP, which had no contact with the HDP, was labeled a ‘PKK supporter.’ Efforts were being made to create a crack in the six-party table through the nationalist sensitivities of the İYİP.

This understanding, which excluded the HDP from legitimate political grounds, was narrowing the opposition's room for maneuver. Although it was obvious that HDP voters would be one of the decisive electoral groups in the second round of the two-round election system, no policy was (could) formulated to address this reality.

Journalist İsmail Saymaz wrote on Monday that an MHP official told him that they had learned about the AKP’'s visit to the HDP from the press. As the visit brought with it allegations that a new opening process was on the way, there were expectations that Bahçeli might demand early elections or show a harsh reaction to the AKP as a ‘balancing act.’

According to journalist Hande Fırat's reports from the MHP lobbies, the party, which ‘has not changed its view on the HDP,’ thinks that the AKP’'s view on the HDP cannot change and that ‘it cannot make a new initiative anyway.’ Thinking that the CHP and the HDP are the same, the MHP does not find it strange that the AKP, which goes to the CHP, goes to the HDP.’ In other words, we may be waiting for a period in which it becomes clear that the AKP and the MHP, which have recently become identical, are two political parties in the alliance.

The AKP’'s proposal for a constitutional amendment to the CHP's proposal for a legal guarantee for headscarves is likely to further complicate politics. The AKP's proposal to change the definition of family to block same-sex marriages in the constitution, in addition to legalising the headscarf, puts the CHP in an unwanted dilemma. The use of closed ballots in constitutional amendments also paves the way for parties to ‘set traps’ for one another, for unexpected parties to vote in the same direction, or for MPs to violate party discipline.

For the time being, it can be interpreted that the opposition parties have strengthened their hand against the accusation of ‘anyone in contact with HDP is a terrorist sympathiser’ and the government's national security and survival discourse has weakened. In the article published in Spektrum titled ‘The thorn-filled road of opposition: Opposition in the State of Emergency,’ the promise of the opposition parties to build a new Turkey depends on ‘refusing to do opposition to the extent permitted by the government.’ 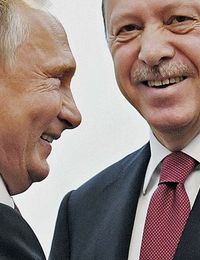 Weekly insights: national and international relations in the run-up to the elections