There are more philanthropists today than ever before. But how is it that inequality continues to grow? Where do the donations go?

There is news that we are used to seeing frequently in the headlines, but which manages to attract our attention every time: 'Philanthropist billionaire pledges to donate most of his fortune.'

Mackenzie Scott, one of the actors in one of the most expensive divorces in history in 2019, is at the forefront of this news. Scott, who played an important role in the founding of Amazon with her ex-husband Jeff Bezos, is already among the richest women in the world with Amazon shares, of which she owns 4% as part of the divorce settlement, and a fortune of $21.2 billion. What saves Scott from being referred to as 'Jeff Bezos' ex-wife' in the headlines and keeps her in the public eye despite not giving any interviews is the donations she has made in the last three years...

Most recently, on 15 December 2022, Scott launched a website called 'Yield Giving', detailing the more than $14 billion in donations she has made to more than 1,600 organisations to date, and announced that she would launch an open call process for charities to request funds. For some, this step taken in the name of transparency was an important development in terms of setting a precedent; however, the scepticism that arises when it comes to billionaires has once again surfaced: 'There are more philanthropists today than ever before. How is it that inequality continues to grow? Are billionaires' donations charity or a way to avoid taxes?'

What is the Giving Pledge?

The role of individual philanthropy has grown significantly over the last 20 years. According to a September 2020 article in The Guardian, 'How philanthropy benefits the super-rich', nearly three-quarters of the world's 260,000 charities were founded in this period and already control more than $1.5 trillion. Given the scale of giving, the biggest philanthropists live in the US and the UK. It is a well-known fact that many philanthropists open their own charitable organisations and carry out their charitable activities through them.

The Bill & Melinda Gates Foundation, co-chaired by Microsoft founder Bill Gates and his ex-wife Melinda Gates, is one of the first organisations that come to mind when we think 'billionaire and charity'. Founded in 2000, the foundation has donated more than $45 billion to date. So much so that the $6.2 billion they donated in 2021 was even more than the foreign aid budget of many countries.

The Gates' contributions to the world of philanthropy were not limited to The Gates Foundation. In June 2010, the Gates and Warren Buffet, the founder of Berkshire Hathaway and famous investor Warren Buffet, known to be close friends, launched the 'Giving Pledge' movement, which has so far been joined by 230 billionaires from 28 countries. This movement is based on the principle that participants pledge to donate half of their wealth to charitable organisations during their lifetime.

Where do the donations go?

Although the number of billionaires who pledge to donate a large portion of their assets is increasing day by day, the real problem starts here. Because there is the visible aspect of donations, which is subject to fancy headlines, and there is a hidden side beneath the iceberg. The assumption that philanthropy automatically leads to the redistribution of money or a Robinhood-like approach of taking from the rich and giving to the poor is mostly wrong. Research shows that in the US, only a fifth of the money donated by major philanthropists reaches the needy, while the rest goes to organisations that invest in 'good causes', such as arts and culture, sports clubs, education and health care.

It is a well-known fact that billionaires, especially in the USA, transfer most of their donations to foundations they have established or to tax-advantaged donor advised funds (DAFs). In these funds, although the fund legally manages the resources, the donor still has a say in where the funds are allocated. According to a study published in July 2022, approximately 30 per cent of charitable donations are made through such intermediaries, surpassing direct donations to traditional charities. In the US, billionaires can claim enormous tax deductions for donations to intermediary organisations, while the lack of strict controls over these organisations raises doubts about whether donations actually reach charities.

For example, a few weeks ago, it was revealed that Tesla CEO Elon Musk's $5.7 billion Tesla share donation announced in November 2021 went to his foundation. Thus, while the foundation became one of the largest organisations in the US with an asset value of $ 9.4 billion, Musk was once again at the centre of the question 'Will he benefit from a tax deduction with his donation?'

On the other hand, the 'Philanthropy Score' list published annually by Forbes shows that billionaires fail in philanthropy. According to the September 2022 version of the list, which calculates billionaires' philanthropic activities based on direct donations, excluding cash sitting in their private foundations or donor-advised, tax-advantaged funds that have not yet reached those in need, the results are as follows:

Could a 'billionaire tax' be the solution?

Allegations and data that billionaires use their philanthropic activities as a secret solution to avoid taxes have fuelled the debate on a 'billionaires tax' in the recent years.

In Davos in 2019, Dutch economic historian Rutger Bregman was asked how we can prevent the social backlash caused by rising inequality: 'The answer is very simple. Stop talking about charity and start talking about taxes. Taxes, taxes, taxes, taxes... To me, everything else is rubbish.' In the years following this outburst, especially during the Joe Biden era in the US, the 'billionaires tax' became one of the ideas frequently put forward by politicians.

Legislative proposals, which include an annual tax payment from billionaires on the value of the assets they own and the value they earn, and an increase in taxes, have also received support from names such as Warren Buffet and Bill Gates; however, no concrete steps have been taken so far. Moreover, the discussions started to gradually diminish as the impact of the pandemic decreased. It is not known whether the billionaire tax will be implemented soon; however, the dark clouds over the philanthropic activities of billionaires do not seem to dissipate unless there is increased supervision and new rules. 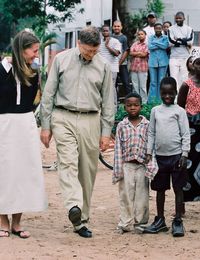