How do the AK Party and MHP view foreign policy?

The AKP states in its program that Turkey's location is a magnet for many collaborations and that the use of this potential ‘depends on the wise use of geopolitics.’ Turkey needs to reorganise its relations with power centres in an ‘alternative, flexible, and multi-axis’ manner while claiming that ‘the quality of military alliances and blocs as the determining factor of international relations has significantly diminished’, even though the opposite is true today, especially after Russia invading Ukraine and the NATO’s role getting bigger.

The governing party promises ‘a realistic foreign policy based on mutual interest relations.’ Instead of relying solely on the bureaucracy for foreign policy decision-making and implementation, the party also aims to involve parliament and society. Turkey, ‘an element of regional stability with its democracy, economy, and respect for human rights,’ will take more initiative to resolve crises and increase efforts to maintain good relations with its neighbours, based on dialogue.

Good relations with European countries and the European Union will be established, ‘the conditions for EU membership will be met as soon as possible, and the agenda will be prevented from being occupied with artificial problems.’ It is stated that cooperation with the US will continue, with an emphasis on defense, and that there will be more cooperation in the fields of economy, investment, science, and technology, and that ‘friendly relations based on cooperation rather than competition’ will be established with Russia. ‘In addition to the traditional Atlantic and European dimensions of Turkish foreign policy, efforts to develop a Eurasian-oriented policy will continue.’ It is said that closer relations will be established with China and the dynamic economies of Asia. 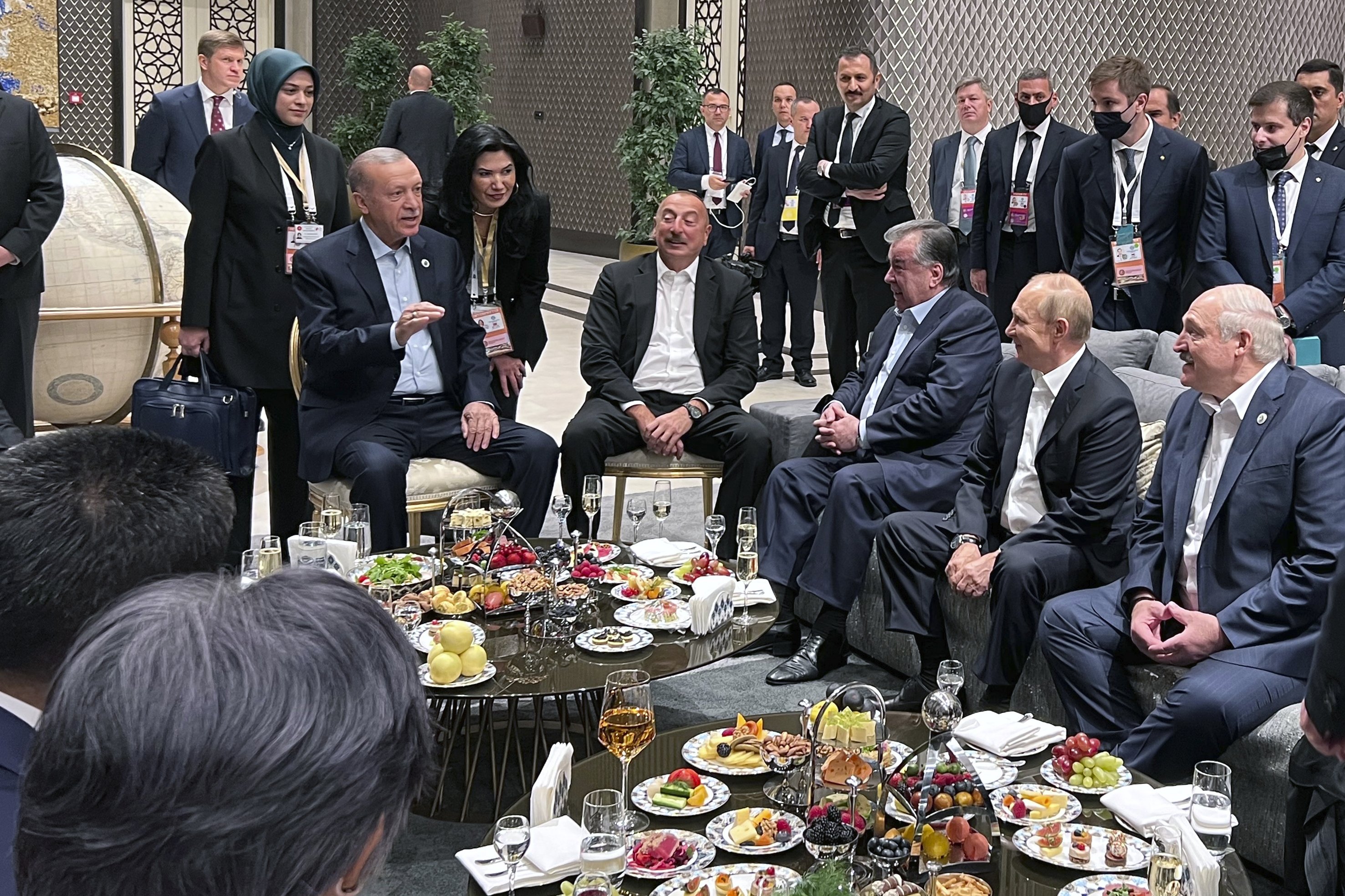 With Greece, it is stated that ‘relations based on economic interests will continue to increase, and the environment of trust that these relations will create will prepare the ground for the solution of more complex political problems.’ It is argued that the solution in Cyprus should be based on a compromise between the two states.

The AKP advocates the development of relations with the Central Asian Turkic Republics. It is said that ‘special importance’ will be given to relations with Islamic countries and that efforts will be made for the Organization of the Islamic Conference to gain a more reputable place in the international arena.

It is stated that new areas of cooperation have emerged in the Black Sea and the Caucasus with the end of the Cold War. Some say that Turkey will try to contribute to the economic integration of the Caucasus, which has underground and aboveground resources, with the Middle East and the Balkans.

Efforts will also be made to further protect the rights of Turkish citizens living abroad.

Although the AKP claimed to have a realist foreign policy vision, it pursued an anti-realist idealist foreign policy at the expense of not maximising Turkey's national interests, especially in the process that started with the Arab Spring. This ‘pan-Islamist’ idealism became unsustainable when the coup that overthrew the Muslim Brotherhood government in Egypt turned into a permanent government, and the Assad regime in Syria did not fall. Turkey has become an isolated country in its region due to the AKP's idealistic foreign policy that is detached from reality. It has become so hard to protect its rights and interests, especially in the Eastern Mediterranean.

President Erdoğan's demand for a meeting with Bashar al-Assad, whom he criticised with harsh words years ago, and severed all diplomatic relations with, or with Abdel Fattah al-Sisi, with whom he recently shook hands, or his role as a mediator in the invasion of Ukraine by differentiating himself from Western countries and pursuing a policy that does not put his interests at risk, can be considered as the clearest indicators of the return from idealism to realism. 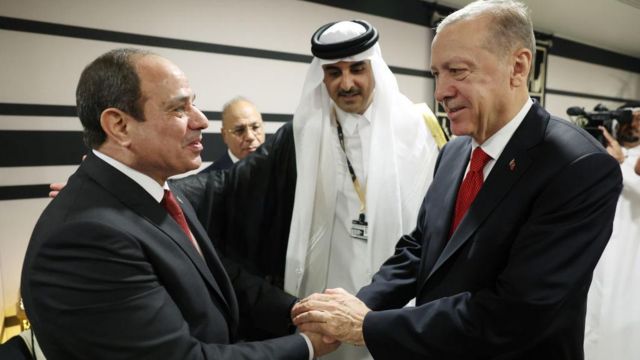 Turkey has become the country with the highest inflation rate in Europe under the AKP rule. It ranked 147th out of 179 countries in the latest Democracy Report of the Gothenburg University Institute for Varieties of Democracy. In 2021, 22% of all applications to the European Court of Human Rights for human rights violations were related to Turkey. As a result, Turkey has moved far away from the AKP program's claim to be ‘an element of regional stability with its democracy, economy, and respect for human rights’ and to take the initiative in regional crises.

While it is possible to say that the AKP's foreign policy towards Russia, the Caucasus, and Eurasia is consistent in practice, it is impossible to talk about an effort to complete the EU membership requirements. On the contrary, relations between the EU and Turkey are experiencing one of the coldest periods in history. Opposing the program, it is also difficult to talk about an effort to improve relations with the US and Greece. On the other hand, given the attitudes of the EU, the US, and Greece towards Turkey, it would be unfair to the ruling party to explain this situation solely by the AKP's policies.

The MHP program also emphasises the importance of Turkey's geostrategic position. It advocates a ‘realistic, Turkey-centred, and multifaceted foreign policy based on a national strategy based on mutual interest.’

Addressing the issue of foreign policy in more detail than the AKP in its program, the MHP defines the goal of its foreign policy as ‘protecting and developing Turkey's national security and national interests; creating a belt of peace, stability, and security around us; establishing relations based on mutual respect and mutual benefit with all countries, especially our neighbours; finding fair and lasting solutions to existing problems within the framework of international law by protecting Turkey's rights and interests.’

While aiming for Turkey to be a strong, respected, trusted, listened to, and sought-after country, it is emphasised that ‘respect for national culture, territorial integrity, and unitary state structure’ is a red line. It underlines the principle of non-interference in the internal affairs of other states, and demands ‘a foreign policy with personality that takes into account not only commercial but also historical and cultural dimensions’.

Like the AKP, the MHP advocates Turkey's leadership in increasing cooperation between the Caucasus, the Balkans, and the Middle East, while opposing ‘global projects that destabilise the region and bring blood and tears.’ What these projects are is not explained in the program.

The priority area of interest of the foreign policy is defined as the Turkic world, and it is aimed to develop and deepen economic, social, political, and cultural relations with Cyprus, the Caucasus, Central-Asian Turkic Republics, and Balkan countries. 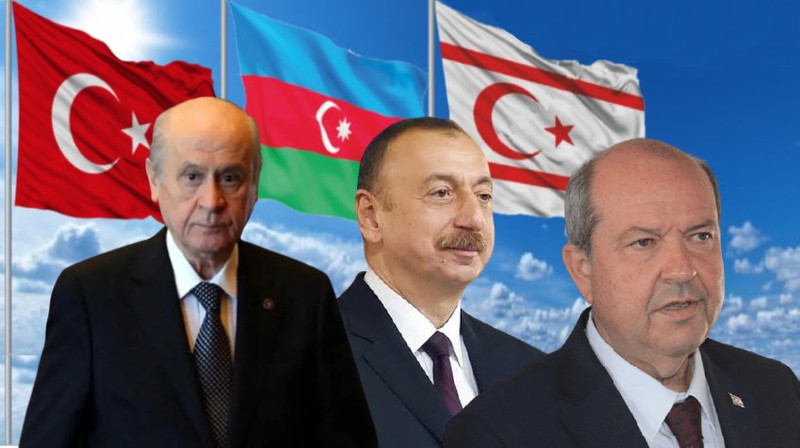 Unlike the AKP, the MHP characterises Cyprus as Turkey's ‘most important national cause.’ It argues that the only realistic solution on the island is a two-nation, two-state structure and closes the door to the idea of federation.

The party sees the need for a redefinition of relations with the EU but opposes the idea that the issue is a ‘question of identity and destiny’ for Turkey. It underlines that Turkey ‘does not need to be dragged into the EU orbit’. However, if the EU observes Turkey's sensitivities on national unity, terrorism, separatism, Cyprus, Greece, and Armenia; it would be reasonable to continue partnership negotiations.

It is advocated that relations with the US should be ‘carried out based on equality and reciprocity in a way to serve the mutual interests of both sides in economic, political, and security dimensions,’ and that joint economic projects should be developed with Russia, Iran, Balkan, and Middle Eastern countries based on peace, stability, and regional cooperation and that a dynamic economic cooperation environment should be created with African, Far East, and South East Asian countries. The MHP calls this approach a ‘multilateral foreign policy.’

Special emphasis is placed on the territorial integrity of Iraq, and the importance of ‘protecting the rights of the Turkmen presence in Iraq and preventing Iraqi territory from posing a security threat to Turkey’ are underlined. In the face of the terrorist threat to Turkey from Iraqi territory, it is stated that ‘Turkey will use its rights arising from international law to eliminate terrorist elements.’ 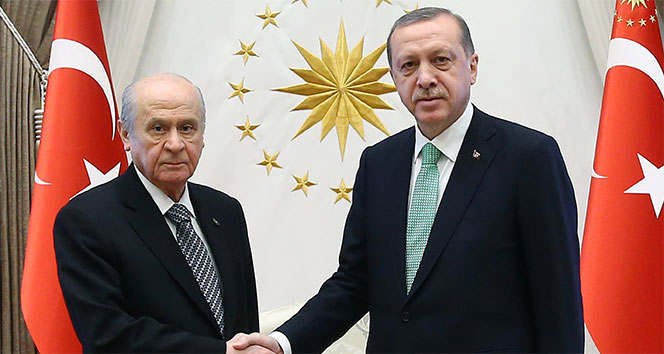 Moreover, the MHP, whose sensitivity to the Cyprus issue is reflected in its program, can also be interpreted as having played a role in the AKP's insistence on a two-state solution, which had once supported the establishment of a federative structure in Cyprus with the Annan Plan. The MHP also played a role in the AKP's pursuit of a deterrent foreign policy in the Middle East through cross-border campaigns, its failure to advance EU accession negotiations, and its strong support for Azerbaijan in the war between Azerbaijan and Armenia. 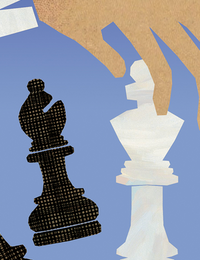