Who is the right candidate? #2 Names and possibilities

Last week in Spektrum, we created a ‘recipe’ for the opposition's presidential candidate, which has become one of the hotly debated topics in the run-up to the June 2023 elections, based on the definitions of columnists and politicians. In this article, we will interpret the most discussed and anticipated potential candidates for the six-party opposition, under current circumstances.

Since the six-party announced its alliance, various names have been mentioned as the presidential candidate of this group. While some of these names are political insiders, and former political figures, others are far from politics. Certain names are being evaluated and sometimes the public opinion is being measured by polling companies. So what are these names and what do the evaluations say?

CHP leader Kemal Kılıçdaroğlu is the most prominent name in the opposition alliance. Kılıçdaroğlu's candidacy is strongly supported by a certain group of people, while others are firmly against his candidacy.

Supporters argue that Kılıçdaroğlu is the ‘legitimate candidate’ of the opposition because he brought the six-party together, his ‘March for Justice’ in 2017, and his success in metropolitans in the March 2019 elections. Those who claim that Kılıçdaroğlu's recent rhetoric against President Erdoğan and his statements in front of institutions such as TÜİK (Turkish Statistical Institute), CBRT (Central Bank of the Republic of Turkey), and MEB (Ministry of Public Education) have created the ‘right reactions’ suggest Kılıçdaroğlu is the most prominent name in the opposition.

In his column titled ‘Why should Kemal Kılıçdaroğlu run?’ in Independent Turkish, Nevzat Çiçek writes that Kılıçdaroğlu's candidacy ‘is as halal as his mother's white milk’ (this idiom is used in Turkish to mean ‘to deserve more than enough). Çiçek answers the question of why Kılıçdaroğlu should run, with 17 arguments some of which are: ‘he uncovers confidence in society’, ‘he has won municipalities with the alliance he established’, ‘he does not impose himself as a candidate’, ‘he can break the prejudgement that a candidate cannot be elected because of their ethnic or religious identity’ and ‘he is sincere in making amends’.

It is possible to say that the number of people who do not support Kılıçdaroğlu's candidacy surpasses those who do, for various reasons. Let us emphasise this. Some claim that the society will not accept ‘an Alevi president’. Kılıçdaroğlu's candidacy is ‘1-0’ behind because he has always lost to President Erdoğan so far. Some argue that it will lead to a backward start.

Habertürk columnist Sevilay Yılman wrote in her July column that there is an ‘allergic reaction’ to Kılıçdaroğlu in society and she argued that not only for this reason but also because of the six-party panel, not everyone would support Kılıçdaroğlu's candidacy.

What about the polls? According to the latest poll conducted by Yöneylem Research, 46.8% of the respondents answered ‘Kılıçdaroğlu’ and 40.6% answered ‘Erdoğan’ when asked, ‘Who would you vote for if the presidential election were to go to the second round?’. Mehmet Pösteki, General Manager of ORC Research Company, said that in a survey, which he said has not been published yet, there was a head-to-head situation of 38%-38% on the question ‘What would be your preference in a Kılıçdaroğlu-Erdoğan race?’.

Editor's note: If CHP leader Kılıçdaroğlu officially announces his candidacy, the public's attitude towards the CHP leader may become more constructive as the uncertainty will end. Kılıçdaroğlu may be able to convince a certain segment of the public that he is ‘guiding’ the government with his six-party success, KYK (an institution that provides students with scholarships and loans) debts, and the EYT (retirement age victims) agenda; however, he should keep in mind that a significant proportion of citizens approach him with complete ‘antipathy’. Especially after Meral Akşener's speech called ‘I am a candidate for prime minister’, Kılıçdaroğlu is the most prominent candidate. On the other hand, keeping his candidacy on the agenda in such a topical way might prevent the main candidate from being worn down if he does not run.

Following Kılıçdaroğlu, another name that has been brought up again and again for ‘candidacy’ is Ekrem İmamoğlu, the mayor of Istanbul Metropolitan Municipality. İmamoğlu's candidacy is being discussed at least as much as Kılıçdaroğlu's. Even more than his candidacy, ‘why he cannot be a candidate’ is being discussed. Since last year, it has been rumoured that İmamoğlu had requested to run for the presidency, but Kılıçdaroğlu did not support him and warned him. So much so that it was even claimed that Imamoğlu and Kılıçdaroğlu have fallen out.

However, especially in the recent period, İmamoğlu has been casting a shadow over the allegations with his statements that he ‘supports Kılıçdaroğlu's candidacy’ rather than his own. On the other hand, it is claimed that İmamoğlu is no longer waiting for a ‘candidacy’ but a ‘general presidency’. Hürriyet columnist Abdülkadir Selvi expresses these claims as follows:

What about the polls? In the above-mentioned survey conducted by Yöneylem Research, 50.1% of the respondents answered ‘İmamoğlu’ and 39.3% answered ‘Erdoğan’ to the question ‘Who would you vote for if the presidential election were to go to the second round?’ in which Erdoğan and İmamoğlu were compared.

Mansur Yavaş, the mayor of Ankara, has been considered a potential presidential candidate since his first year in office. Although it was rumored that Yavaş did not want to ‘run’ and wanted to continue with the municipality, the allegations never stopped. Even the leader of the Zafer Party, Ümit Özdağ, stated that his candidate was Yavaş, while Yavaş stated that he would ‘continue as a civil servant’. It is known that a certain group in the İYİ Party supports Yavaş due to his nationalist roots.

Although Yavaş is portrayed as the ‘ideal candidate’ by many, due to his success in local politics, his distance from the political agenda, and his lack of involvement in polemics, the HDP wing also states that they will never support Yavaş due to his nationalist origin. From this point of view, if he becomes the candidate of the six-party, Yavaş is expected to convince the MHP base and swing voters while losing the support of Kurdish voters.

On the other hand, according to a recent report in the Milli Gazete, Yavaş will only accept the nomination if Kılıçdaroğlu offers it to him. Journalist Fehmi Koru said about Yavaş's candidacy: ‘Yes, I think that Meral Akşener is the party leader who played her hand the best at the 'six-party alliance’ and Mansur Yavaş is her candidate.'

What about the polls? Most opinion polls show that Yavaş is the only candidate with a clear lead over Erdoğan. In the above-mentioned survey conducted by Yöneylem, 57.3% of the respondents answered ‘Yavaş’ and 34.2% answered ‘Erdoğan’ to the question ‘Who would you vote for if the presidential election went to the second round?’ in which Erdoğan and Yavaş were compared. In this survey of Yöneylem, Yavaş is the name that defeats Erdoğan by a significant margin.

Editor's note: Mansur Yavaş has attracted Turkey's attention especially due to his success in local governance. At the same time, he has always stayed away from the political agenda. İmamoğlu, on the other hand, had a say in the administration despite the AKP's majority in the municipal council but remained at the centre of political issues and debates. Therefore, a comparison of these two candidates reveals why Yavaş has relatively more supporters. Although it has been speculated that Yavaş's political messages will decrease his vote rate, the public is now expecting a ‘service-oriented approach away from controversy’. On the other hand, we should bear in mind that in the unlikely event that the six-party bloc wins the elections and a strengthened parliamentary system is chosen as the form of government, the president will only be in power for seven years. After seven years of governance, the president will disappear from politics. Imamoğlu and Yavaş are two names that will not want to leave politics yet.

Since the six-party alliance was formed, it has been rumored that 11th President Abdullah Gül would be a joint candidate. Sabah columnist Mahmut Övür wrote in August about Gül's candidacy, which has been on the agenda from time to time like other names, ‘It seems that Gül is planning to run again. Although many people say, ‘The CHP will not accept Gül's candidacy when they are so prepared for Kılıçdaroğlu's candidacy,’ there is not much they can do once the decision comes off the table. There are also speculations of a person who is shuttling between Gül and Kılıçdaroğlu on this issue: Former minister Ertuğrul Günay. It is rumoured that a team including Günay is doing serious PR work for Gül to become a presidential candidate.’

It was claimed that former Constitutional Court President Haşim Kılıç would also be a candidate for the People's Alliance. Kılıç responded to these allegations by saying, ‘I don't know on what basis such an allegation was made’. It would not be wrong to assess that the nomination of a name so distant from society would create a second ‘Ekmeleddin İhsanoğlu’ case.

Özgür Demirtaş was also one of the periodic claims. The claim of an economist for the presidential candidacy had a shock effect on public opinion. Demirtaş's statement ‘We made a primary decision in the family. We will not say anything politically.’ was interpreted as a kind of confirmation of this claim.

Or is someone completely different?

Besides all these names, the election is still nine months away. Perhaps the six-party alliance will come up with a completely different name. However, it is crucial to keep in mind that it is critical that the candidate is known and liked by the public. In addition, the table of six should not forget that they are running to ‘win’. Possibly putting forward separate candidates could divide the voting unity and make Erdoğan lose the election, while the idea of ‘let's put our candidates, and carry on with whoever makes it to the second round’ could create a door for Erdoğan to show his strength in the first round.

Central Bank of the Republic of Turkey 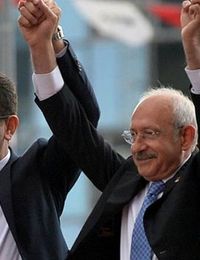